Thursday 17 June is Clean Air Day and the Bittern Line and Wherry Lines Community Rail Partnerships along with our fellow regional partnerships have teamed up with Network Rail and rail operator Greater Anglia to support a new campaign encouraging drivers to switch off their engines when they are waiting at level crossings in a bid to help reduce air pollution. The campaign will see the organisations taking to social media and working with communities to raise awareness locally with posters and car window stickers funded by Community Rail Network.

The initiative is being supported by over 260 volunteer station adopters from across the Greater Anglia region, many of whom have noticed the problem of unpleasant exhaust fume pollution and noise caused by cars idling at level crossings in their own communities. An idling engine can produce up to twice the emissions of a car in motion, churning out sulphur dioxide, particulate matter and nitrogen oxide. All of these are thought to contribute to asthma, heart disease and even lung cancer and have a negative effect on the environment by contributing to poor air quality.

There are over 800 level crossings in East Anglia which are used by thousands of vehicles every day. Just one car idling at a level crossing could fill up to150 balloons per minute with exhaust fumes. If you’d like to take part in the campaign, you can find more information on the Network Rail website 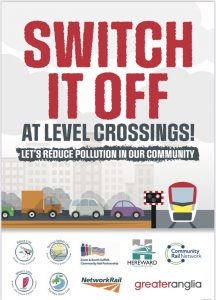