A rare Norfolk railway sign, thought to be the only surviving structure of its kind still in existence on the national rail network, has been restored to its former glory following a collaboration between rail operator Greater Anglia, the Bittern Line Community Rail Partnership and Essex based company Dura Composites.

The station name sign, known in the industry as a Running In Board has been welcoming passengers to West Runton Station in North Norfolk for 100 years, having been manufactured by the Midland and Great Northern Joint Railway (M&GNJR) at their engineering works in Melton Constable during 1921. 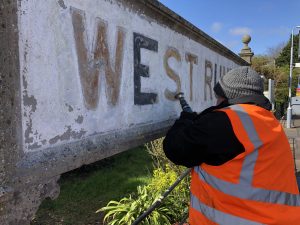 With the country under threat of invasion during World War Two, the letters were removed as part of measures to prevent enemy forces determining their positions and it is believed these were not replaced for many years. In the early 1990s the board underwent restoration by leading M&GNJR expert Nigel Digby using wooden lettering however, thirty years on and following several replacement letters being provided, it was hoped to find a more permanent solution that could better withstand the coastal climate. 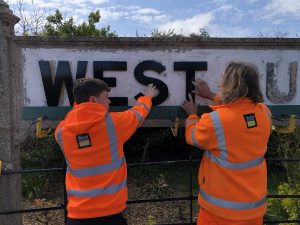 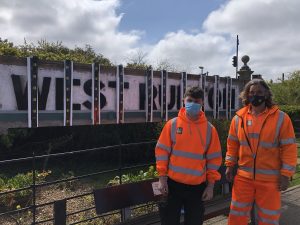 Essex based company, Dura Composites who specialise in GRP (Glass Reinforced Polymer), undertake numerous projects across the rail network and following a successful scheme for Greater Anglia in Suffolk, were approached to see if they could assist.

Volunteers from the Community Rail Partnership, stripped the sign back to bare concrete and in researching the original font used for the lettering, found another at the former M&GNJR Gedney Station in Lincolnshire which had closed to passengers in 1959. Experts from Dura were able to match the font used for the lettering and manufacture a new set using more robust materials. 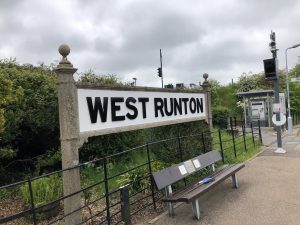 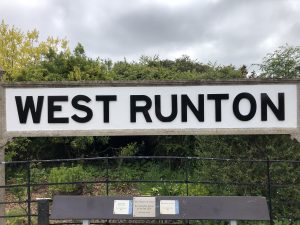 In April, the company kindly donated the new lettering and provided two members of their team to install them, the sign has since been re-painted and is now looking splendid in its 100th year.

Chris Hawkins, Asset Inspection Quality Controller at Greater Anglia, said: “We are very grateful to Dura Composites for their help in restoring this running board and preserving this important piece of railway history. “Their in-house grapic designer has a degree in graphic communication and typography and was able to identify the closest modern day match to the original font so the letters could be replicated. “We’re so pleased with the finished result and hope it will be appreciated by those who use the station and people living in the local area.”

Martin Halliday, Development Officer for Community Rail Norfolk, added; “We were delighted to work with Greater Anglia and Dura Composites to restore this unique piece of railway infrastructure. “The sign is a familiar landmark for many thousands of rail users and is undoubtably one of the most iconic original station running in boards still to be seen on the UK rail network. “We are hugely grateful to everyone involved in the project.”

Stuart Burns, Managing Director for Dura Composites, said; “We were very pleased to be asked to help on such an important project. Through initial discussions we felt that our composite technology would work well in this new application. However, following the selection of appropriate font and precision CNC works we were delighted to see such a brilliant result following the enthusiastic on-site work from our experienced team members”.