The Bittern Line and Wherry Lines Community Rail Partnerships have worked with rail operator Greater Anglia to produce new paper timetables for their Norfolk and North Suffolk routes in support of people without Internet access – and with the added benefit of supporting tourism in those areas.

10,000 timetables have been produced for the Wherry Lines which run between Norwich to Lowestoft and Norwich to Great Yarmouth and the Bittern Line which serves the route between Norwich and Sheringham via North Walsham and Cromer. The timetables are now available from various outlets including the North Norfolk Visitor Centre at Cromer, the North Norfolk Railway shop in Sheringham, Broads Information Centre in Hoveton, North Walsham Heritage and Advice Centre and the Community Rail Shop and Tourist Information Office at Lowestoft railway station as well as from staffed Greater Anglia stations in Norwich, Great Yarmouth and Lowestoft.

David Pearce, Vice Chair of the Bittern Line Community Rail Partnership said, “We recognise that there is a small but significant proportion of rail users that are not able to access the internet or indeed prefer a printed version. We are therefore pleased to have teamed up with our sister partnership, the Wherry Lines, to produce paper timetables for our routes.”

The initiative has been welcomed by local transport user groups, including the East Suffolk Travel Association and the East Norfolk Transport Users Association with their membership’s assisting with distribution of the new publications. 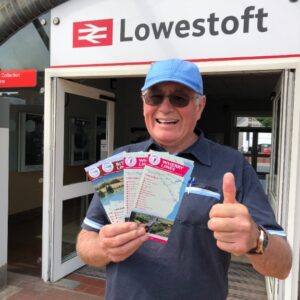 Trevor Garrod, Chair of the East Suffolk Travel Association said, “We very much welcome this initiative and are supporting the distribution of the paper timetables through our membership. At a time when it is important to attract passengers back to the railway, ensuring that timetables are available to everyone in formats they can use is essential.”

Stephen Hewitt, Spokesperson for Great Yarmouth based East Norfolk Transport Users Association added; “Not everyone is able to check rail timetables on a phone or computer therefore to have printed versions available will be a great help to the many people unable to do so. We are grateful to the Bittern Line and Wherry Lines Community Rail Partnerships for recognising this hugely important issue.”