The church of St Nicholas dates from the 1300s and its ruined tower stands 85 feet tall. Work on the church was interrupted by the ‘Black Death’ plague in 1348 and once again in 1361, due to a lack of skilled craftsmen.

Another delay came about during the time of the Peasants’ Revolt in 1381, when a large group of rebellious peasants (led by local dyer John Litester) fled into the parish church for sanctuary. They were confronted and defeated by the armed forces led by the warlike bishop of Norwich, Henry le Despenser, who ordered all who were captured to be killed instantly. The completed church was later consecrated by the same bishop towards the end of the 14th century.

The church was originally dedicated to the Blessed Virgin Mary; it was only in later years after the reformation that the change to St Nicholas came about. Today, the church remains one of Britain’s largest parish churches and it is home to many unusual artefacts including the intricately carved baptismal font cover, a massive iron-bound chest with seven locks, medieval misericord seats and the marble sarcophagus of Sir William Paston (1528-1610). 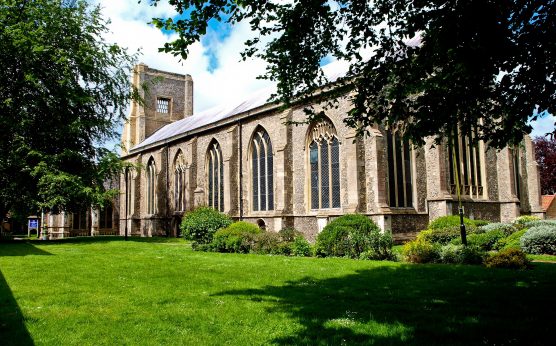